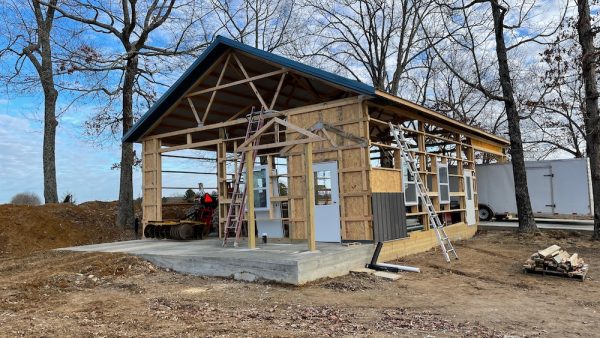 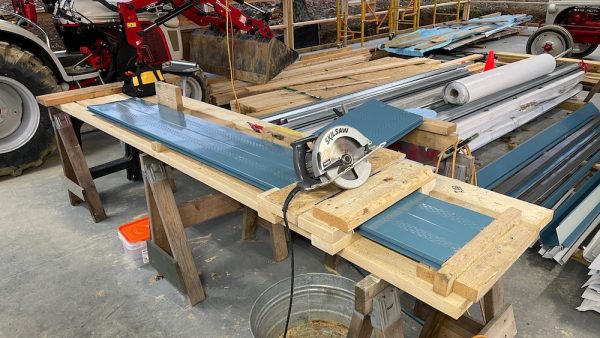 I built a jig to cut the soffits to size, which worked out well. I bought a special metal-cutting blade for my Skilsaw, which left a fairly clean edge. 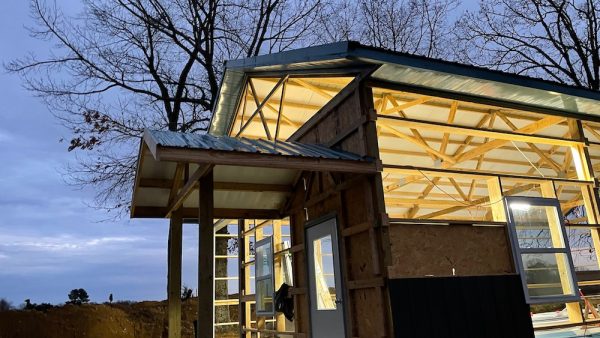 Like most everything I’ve done on this building, my first installs weren’t top-grade, but I had the hang of it (mostly) by the time I got back around to where I started. 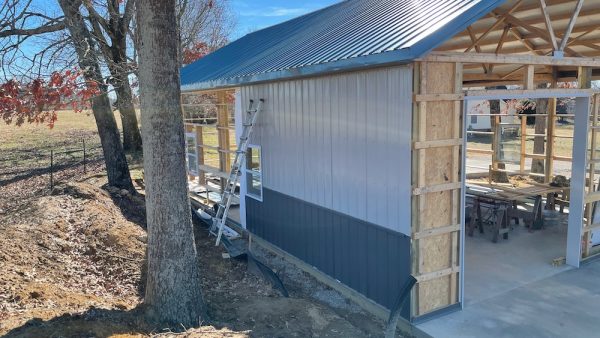 Case in point was the first wall steel panels. My housewrap rolls are 10′ wide, so I’d run a section of that, then do the wainscot and upper panels. I did the side wall that faces away from the house first (toward the cow pasture – they won’t care), which was wise, and I was really struggling to get the ridges to line up top and bottom, as well as was having trouble with screws barely missing the girts. This was partly because I had yet to figure out I needed to put spacers inbetween the girts to hold them at the proper height, as well as dealing with lumber cut where it had a beveled edge due to there being bark there. I was not really happy with the quality of lumber they sent (I would have rejected at least ⅓ of it at my local big box store), but they had a disclaimer on what was “acceptable” and their tolerance was wide enough that it wasn’t worth arguing. Oh well. 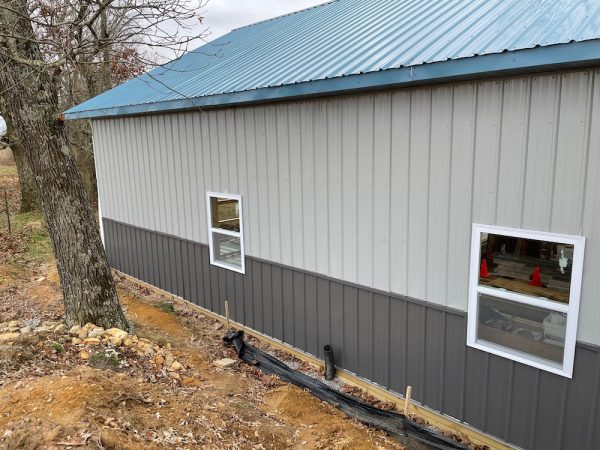 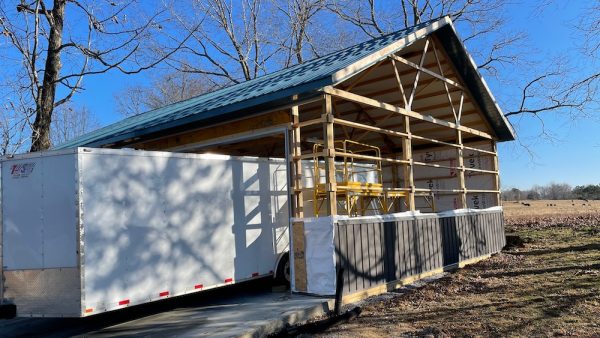 I rounded the corner to the South wall, and decided to run all the wainscot at once since the wind was whipping too strong to try to hang a 21′ tall piece of housewrap. 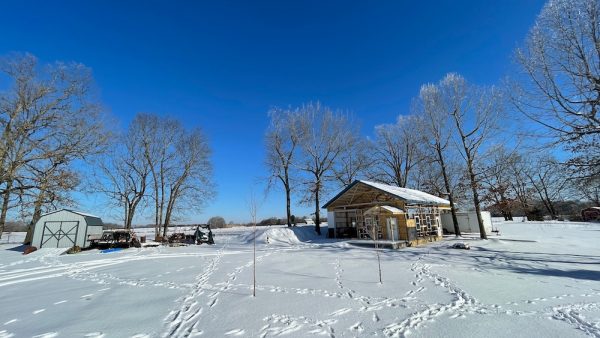 That was as far as I got for a while, as the big winter storm hit, dropping 2″ of sleet and ice, followed by 4″ of snow. Sure was pretty, though! 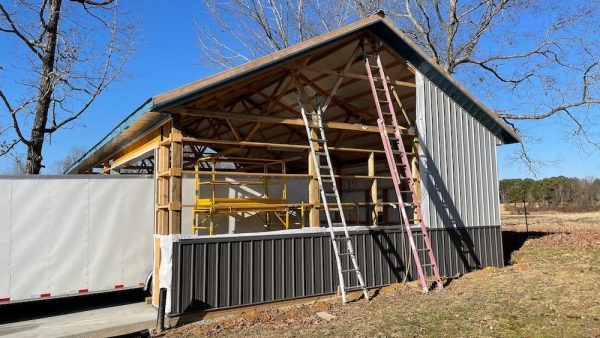 Things eventually melted off and once the ground was dry enough to support ladders, I got back to work. My ridges all lined up this time (getting the hang of things), but my panels were slightly larger than 36″ o/c, which caused my last panel to be a few inches too long, necessitating a little trimming. 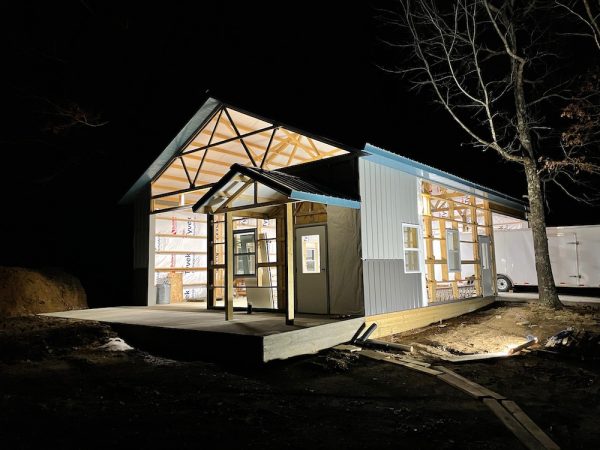 Once the South wall was complete, I did the West wall. This one was a bit more complicated due to two windows, plus an entry and overhead door opening. 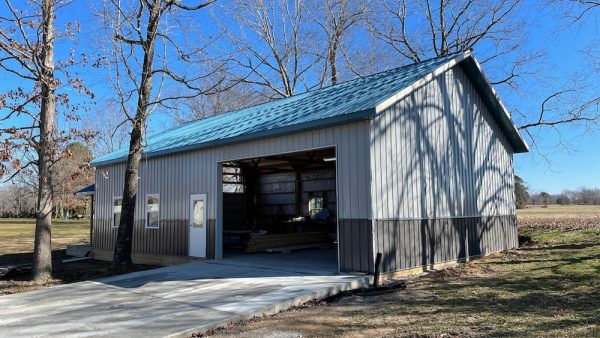 It actually turned out okay, as long as you don’t look too closely. I’d give this wall a B score. 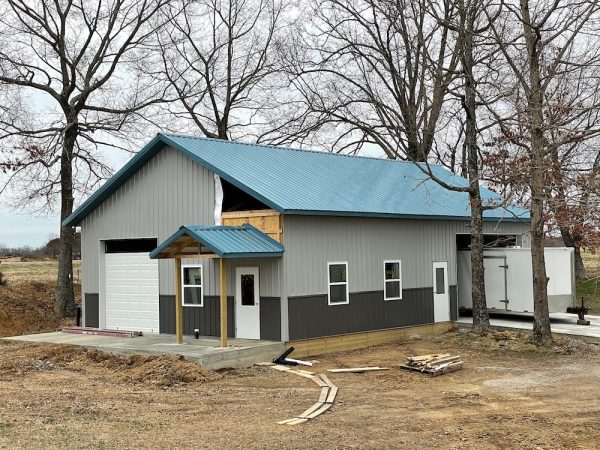 The final North wall was the most complicated due to the porch roof. Due to rain, I took a break and worked on installing the 10′ wide overhead door. Once things dried up, I got as far as the porch roof, only to discover they shorted me the panels needed to complete this section! I was able to use cutoffs to finish under the roof, but have had to request they send the missing panels, so that last section is at a standstill until those arrive. 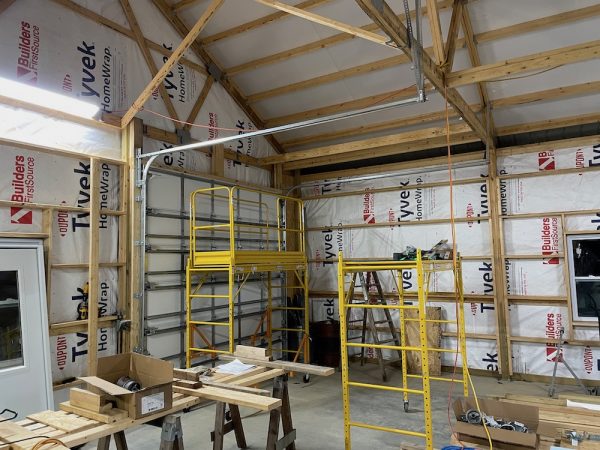 So I moved back on the overhead door, and got the final panel and horizontal tracks installed today. I’ll have to restack my lumber piles and move my big trailer out of the way before I start the 16′ wide door. Once that’s in, I can lock the building and finally start moving all my shop stuff out of the garage.