Constant thanksgiving and gratitude are due from the American people to Almighty God for His goodness and mercy, which have followed them since the day He made them a nation and vouchsafed to them a free government. With loving kindness, He has constantly led us in the way of prosperity and greatness. He has not visited with swift punishment our shortcomings, but with gracious care, He has warned us of our dependence upon His forbearance and has taught us that obedience to His holy law is the price of a continuance of His precious gifts.

In acknowledgment of all that God has done for us as a nation, and to the end that on an appointed day the united prayers and praise of a grateful country may reach the throne of grace, I, Grover Cleveland, President of the United States, do hereby designate and set apart Thursday, the 29th day of November instant, as a day of thanksgiving and prayer, to be kept and observed throughout the land.

On that day let all our people suspend their ordinary work and occupations, and in their accustomed places of worship, with prayer and songs of praise, render thanks to God for all His mercies, for the abundant harvests which have rewarded the toil of the husbandman during the year that has passed, and for the rich rewards that have followed the labors of our people in their shops and their marts of trade and traffic. Let us give thanks for peace and for social order and contentment within our borders, and for our advancement in all that adds to national greatness.

And mindful of the afflictive dispensation with which a portion of our land has been visited, let us, while we humble ourselves before the power of God, acknowledge His mercy in setting bounds to the deadly march of pestilence, and let our hearts be chastened by sympathy with our fellow-countrymen who have suffered and who mourn.

And as we return thanks for all the blessings which we have received from the hands of our Heavenly Father, let us not forget that He has enjoined upon us charity; and on this day of thanksgiving let us generously remember the poor and needy, so that our tribute of praise and gratitude may be acceptable in the sight of the Lord. 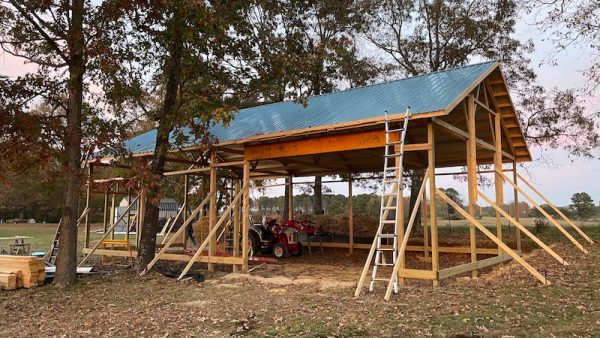 My Brother-in-law and his wife ended up staying with us an extra few days, and we were able to get about ¾ of the roof panels installed before rain moved in and they had to leave. Once things dried up a bit, my wife and I finished the remaining nine panels. This meant I had no choice but to harness up and go up on the roof (I’m no fan of heights). Since the roof ended up a bit out-of-square – and was recalcitrant in moving back into square – we had to fudge a little on the end panels to make them line up properly. This will be covered by trim, and shouldn’t be noticeable. The ridge cap went on relatively quickly, but as I had no attach point for the harness, I had to “install without a net,” as it were. Thankful to the Lord for no slip and fall accidents!

The next phase involves trenching for power, water and drain lines, then installing compacted fill prior to pouring the floor.

The Lord detests dishonest scales,
but accurate weights find favor with him. 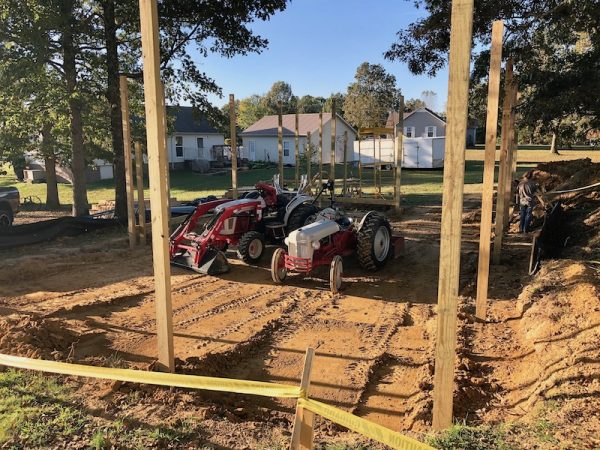 When we last left our story, the post holes had just been filled with concrete and were setting up. After a couple days of rain stopped work, I spent a couple more hours excavating the site to get it more level within the building line. My brother-in-law and his wife joined us for a couple weeks and we started by installing the skirt boards.

END_OF_DOCUMENT_TOKEN_TO_BE_REPLACED

Want to lose 7 pounds in four days? Set posts! After checking and re-checking my batter board string dimensions and watching a few YooToob videos, I tackled the first post this past Tuesday afternoon. 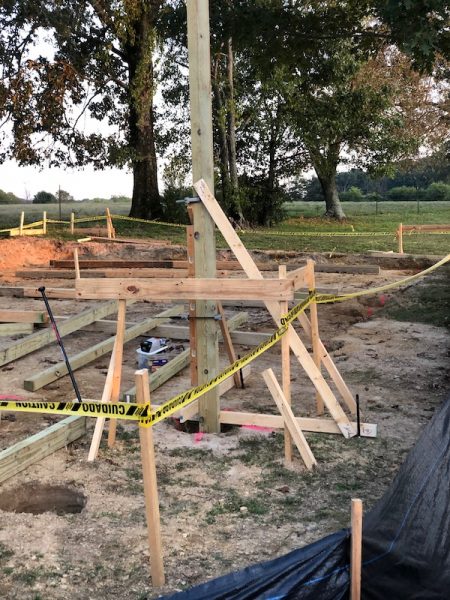 END_OF_DOCUMENT_TOKEN_TO_BE_REPLACED

When we downsized to our 3BR house on one acre in Mid-southern Tennessee, we quickly filled the two-car detached garage to the point we could barely walk through. Cars, tractors and implements, trailers and other yard equipment have had to live out in the weather, waiting until I could build a post-frame shop (pole barn).